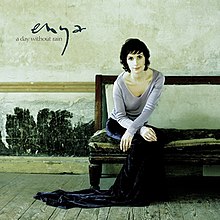 Enya A day without rain (album)

A Day Without Rain is the fifth studio album by the Irish singer, songwriter and musician Enya, released on 20 November 2000 by WEA. Following a promotional tour in support of her compilation album Paint the Sky with Stars (1997), Enya took a short break before she resumed writing and recording a new album in 1998 with her usual recording partners, producer and arranger Nicky Ryan and his wife, lyricist Roma Ryan. While making the album, Enya started to question about her life and attempted to answered them in the material she was writing. In a musical departure from her previous albums, Enya incorporates a string section which was not a conscious decision.

A Day Without Rain received mixed reviews from critics; some felt it too derivative of Enya’s previous albums whilst others complimented the minimal use of overdubbing that her sound had become known for. It was a commercial success peaking at number six in the United Kingdom and initially, number seventeen on the Billboard 200 in the United States. Following the 11 September 2001 attacks, sales of the album and its lead single, “Only Time”, skyrocketed after it was used by several radio and television networks in their coverage and aftermath of the attacks. As a result, “Only Time” climbed to number ten on the Billboard Hot 100 singles chart and A Day Without Rain reached a new peak on the Billboard 200 at number two. It became the fifth highest selling album of 2001 in the United States, and the best selling new age album of all time with an estimated 16 million copies sold worldwide. It remains Enya’s highest selling album of her career. To promote the album, Enya made several interviews and televised performances, including the 2001 World Music Awards. In 2002, the album won Enya her third Grammy Award for Best New Age Album