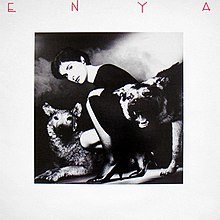 Enya is the first studio album by the Irish singer, songwriter and musician Enya, released in March 1987 by BBC Recordsin the United Kingdom and by Atlantic Records in the United States. It was renamed as The Celts for the 1992 international re-release of the album by Warner Music internationally and by Reprise Records in the United States. The album is a selection of music she recorded for the soundtrack to the BBC television series The Celts, aired in 1987. Four years into her largely unnoticed solo career, Enya landed her first major project in 1985 when producer Tony McAuleyasked her to contribute a song to the soundtrack. After its director David Richardson liked her demo, Enya accepted his offer to compose the entire score with her longtime recording partners, producer and arranger Nicky Ryan and his wife, lyricist Roma Ryan.

Enya received mostly mixed reviews from critics when it was released in 1987. It was a mild commercial success, peaking at number eight in Ireland and number sixty-nine on the UK Albums Chart. The album continued to sell; it was certified platinum by the Recording Industry Association of America (RIAA) for shipments of one million copies. Despite its commercial performance, the album helped Enya secure a recording contract with Warner after chairman Rob Dickinsbecame a fan of its music. After the commercial success of Enya’s next two albums, the album was reissued as The Celtswhich outperformed its original sales. It reached a new peak of number ten on the UK Albums Chart and sold a further one million copies in the United States. In 2009, The Celts was reissued in Japan with a bonus track.

Dawn breaks; there is blue in the sky.
Your face before me
Though I don't know why.
Thoughts disappearing like tears from the Moon.

Waiting here, as I sit by the stone,
They came before me
Those men from the Sun.
Signs from the heavens say I am the one.

[Chorus:]
Now you're here, I can see your light,
this light that I must follow.
You, you may take my life away, so far away.
Now I know I must leave your spell
I want tomorrow.