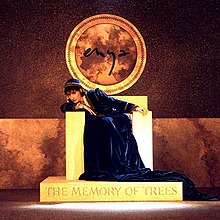 Enya The Memory of Trees (album)

The Memory of Trees is the fourth studio album by the Irish singer, songwriter, and musician Enya, released on 20 November 1995 by WEA. After travelling worldwide to promote her previous album Shepherd Moons (1991), and contributing to film soundtracks, Enya took a short break before she started writing and recording a new album in 1993 with her longtime recording partners, arranger and producer Nicky Ryan and his wife, lyricist Roma Ryan. The album is Enya’s first to be recorded entirely in Ireland, and covers themes that include Irish and Druid mythology, the idea of one’s home, journeys, religion, dreams and love. Enya continues to display her sound of multi-tracked vocals with keyboards and elements of Celtic and new age music, though Enya does not consider her music to be in the latter genre. She sings in English, Irish, Latin and Spanish.

The Memory of Trees received mostly positive reviews from music critics. It became a worldwide commercial success, reaching number five on the United Kingdom and number nine on the Billboard 200 in the United States. In 2000, it was certified multi-platinum by the Recording Industry Association of America for selling three million copies. Two tracks were released as singles; “Anywhere Is” in November 1995, which reached number seven in the United Kingdom, followed by “On My Way Home” in November 1996, which peaked at number twenty-six. Enya supported the album with a promotional tour which included several interviews and televised performances. The Memory of Trees won Enya her second Grammy Award for Best New Age Album in 1997. It was remastered for a Japanese release with bonus tracks in 2009, and became available on vinyl in 2016.

Whispering world, a sigh of sighs,
The ebb and the flow of the ocean tides.
One breath, one word may end or may start
A hope in a place of the lover's heart.
Hope has a place in a lover's heart.

Look to love you may dream,
And if it should leave then give it wings.
But if such a love is meant to be;
Hope is home, and the heart is free